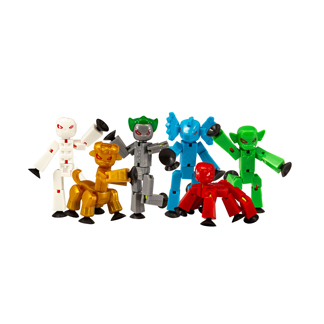 StikBot Monsters nominated for US Toy of the Year Award

StikBot, which is distributed exclusively in the UK by Brainstorm, is ending the year on a high following the announcement of the US Toy of the Year finalists. The Toy Association revealed their annual TOTY Awards programme this week and StikBot was shortlisted in the Action Figure of the Year category with their brand-new collection StikBot Monsters.

This new breed of StikBot is already creating a buzz online with a groundswell of demand from StikBot fans in the UK. While scheduled for an official launch at London Toy Fair 2019, Brainstorm are hoping to make some stock available pre-Christmas and the sales team urge retailers to order as soon as possible. In fact, the retail launch will be supported with a TV campaign commencing Boxing Day and continuing through to back to school.

There are three StikBot Mega Monsters and six Monster Capsules to collect with some rarer than others. Using the StikBot app and its unique green screen capabilities, children will now be able to create stop-frame animations featuring these brand-new characters.

‘StikBot is a huge line for us and we have seen double digit growth this year. Its pleasing to see demand for the new Monsters, from retailers and consumers alike and since Monsters will be arriving mid-December we have stocks to release pre-Olympia and some customers will be able to capitalise on that.’